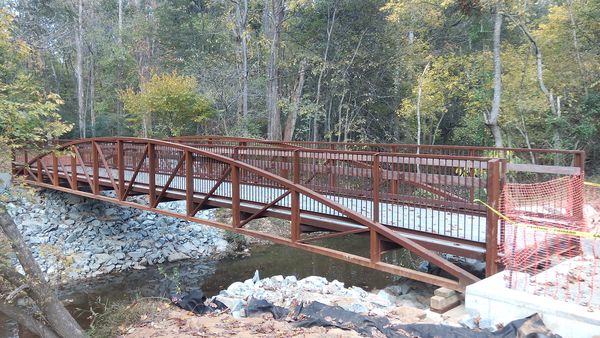 Pictured is one of the weir bridges that’s preventing the asphalt from being laid down on the main trail between Sardis and Monroe roads. As soon as the bridges are completed, the asphalt trucks will start dumping their loads.

Can’t wait for the construction to finish, it’s been tough to ride, so I’ve been walking the trails instead. Everyday brought a different set of obstacles to overcome, so I hung up my spandex in favor of hiking boots.

Fall is here, the McAlpine is looking rather colorful.

What, no more heat?

In the last week, the weather has gone from unbearably hot, to nice and cool. Just like that, the air conditioners can take a break, till next summer.

The McAlpine is still a greenway looking to be finished. They were digging up the main trail between Sardis and Monroe today, then they were laying down gravel, passing over it with a heavy roller.

The excavator driver said that we were looking at 2 months to have a nicely paved walking trail. He also confirmed that 10 feet of dirt will follow the asphalt on either side for us dirt enthusiasts.

Finishing up my first lap around the McAlpine and it started to rain. On a hot day like today it was a welcome event, cooled me down and gave me impetus to pedal faster on the main trail.

There’s not much more speed I can conjure up, the main trail is rather bumpy and the inner trails, with all the new growth, makes it really hard to see around the bends.

Feeling really good, all the work I’ve put in doing yard work has paid off, my legs muscles are well formed by now, the quads are defined.

Oh my aching back

Threw out my back working on the house.

Spent the week hunched over like that guy from Notre Dame, all I needed was the protruding hump. But today I had to get out, no matter what pain I felt.

Surprisingly the ride did me good, I feel much better now, though I’m cramping all over. The McAlpine is still in need of weir bridges, but hey at least there’s gravel on the trails instead of asphalt.

Even though I got out late today, there was a lot of people out there taking their afternoon walks. The bike bell was working overtime, on your left.

All quiet on the trail

The machines were idle this afternoon.

Had some work around the house to do today, but the lovely weather kept inviting me out. Once I finished up for the day, I suited up and headed out.

The trails were empty considering it was a Saturday, I guess everybody had gotten out earlier. There’s still quite a lot of work to be done on the main trail, the weir bridges still need to go up before the asphalt goes down.

Felt good, no more burning lungs, I guess it was the heat.

Woke up to a really nice cool morning.

Headed out to the McAlpine, it wasn’t a pleasant time. The amount of construction happening on this side of Monroe, made it near impossible to ride. Spent quite a lot of time walking and carrying my bike over obstacles.

Finished up riding around the neighborhood to get some miles in.

Looks like the McAlpine is going to be out of commission for the next few weeks as they lay down new asphalt. I’m not even going to attempt to ride it on the weekdays, I’ll wait for the weekend and see if the machines are idle.

The new digs, I like. Inspired me to get back on the bike, headed out this morning.

The McAlpine is still in flux, the weir crossings are for cyclo-cross enthusiasts. On the other side of Monroe, the main entrance and lake area are looking great, ready in time for the cross-country events that are kicking off at the end of August.

Felt good on the ride despite being out of the saddle for two weeks. Missed the trails, I have to enjoy it while it lasts, they’re getting ready to lay down the asphalt, make it all pretty like.

The weather is cooperating, I should be able to get out more often this week.

The heat broke, no more triple digit temperatures, it’s now back to our normal range in the 80’s.

I’ve been off the bike for the last 3 weeks, between the high temps and my workload, it’s not been easy to get out.

Just did 1 lap around the McAlpine Greenway today, getting the legs reacquainted to pedaling and the body acclimated to the heat of summer.

The main trail is nicely packed now, the city’s construction vehicles have smoothed out the washboard effect, too bad, I kind of liked the hand massage.

Made it out early today, and it was still too hot.

On the way back from the lake, with the wind in my face, my lungs started to burn. The heat coming off the main trail was unbearable, and it was like 10 in the morning.

I’m going to have to get out as soon as I wake tomorrow morning, forego getting on the computer and checking emails, forum threads, etc.

Looks like the City of Charlotte is in fast pace mode to get the McAlpine done by August 1.

This morning it was not an easy ride, so I only did one loop around the McAlpine. There was quite a lot of activity on the main trail, I was dodging heavy machinery, it was a hair raising dust breathing ride.

It’s been hard to get out lately, the temperatures have been so hot, that early mornings are the only time to ride. But that’s when the city is out there with their toys.

Also, I’m spending quite a lot time on my computers lately, the wee hours creep up unnoticed, it’s 3 or 4am before I make it to bed.

Spent 10 years in Charlotte, a block away from an entrance to the McAlpine Creek Greenway.

Switched to a mountain bike from the road bikes I was accustomed to riding for 15 years.

The time spent on these trails was most appreciated.